As a card-carrying Asian, of course I eat rice all the time. Hell, I’m eating rice right now as I type this.

But there are moments when, you know, I feel like letting my hair down and going kee-rayzee, like the other day when I headed down to the supermarket to buy *gasp* some grain other than rice. (I know…I’m quite the wild one.)

I made a beeline to the healthy food section, notably sandwiched between the jamón counter and chocolate snacks. My eyes swept through the packs of imported chia seeds, muesli and goji berries before spotting what I’d been looking for – the hallowed superfood praised by Oprah, NASA, and hipsters and health buffs everywhere for its high protein content –  quinoa. 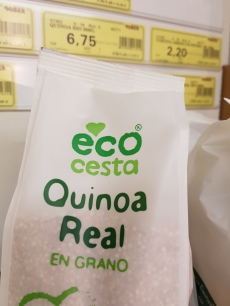 (As a point of comparison, my usual pack of long grain rice costs 70 cents.)

So much for my walk on the wild side. I snapped back to my senses and snatched up two packs of white rice. Rice is life!

Still, I couldn’t help but wonder about quinoa’s trajectory from being a humble staple of Peruvian and Bolivian rural folk to an entrée on the brunch tables of the First World.  I asked a Peruvian friend Helen, who works in the Madrid food industry, about what she thought of quinoa’s rise in popularity and steep prices. (English translation follows)

(“Quinoa was an unknown food even for many Peruvians, only the people of the villages and farmers knew it and consumed it, it was a very cheap food until it was discovered for its high nutritional value, then its prices shot up exaggeratedly. It is a very complete and suitable food for all. In Peru it is known as NASA food. Now it has a very high cost compared to 20 years ago, it’s not cheap enough to be a staple food.”)

Is she surprised by quinoa’s popularity?

(“I am not surprised by the fame of quinoa in Madrid, thanks to all the nutritional properties it has, it’s very healthy and energetic food. Little by little, it is positioning itself in gastronomy and haute cuisine.”)

I’ve heard quite a few times that the quinoa boom over the past decade has ironically left Peruvian and Bolivian quinoa farmers unable to afford it (this 2013 Guardian article points the finger at well-meaning vegans for this). Yet after reading  more recent articles on quinoa, it’s been reported that its surge in popularity has increased the welfare of  Andean agricultural folk  , and that the real threat is growing global competition.

So vegans and hipsters can breathe a sigh of relief that they’re not causing a malnutrition crisis in the Andes.

Consider the Lobster… and Callos, Gumbo and Feijoada

Quinoa is hardly the first food in history to have been gentrified. A few dishes in the typical Spanish menu have humble origins, like gazpacho, which was a staple of shepherds, farmers and peasants in Southern Spain. Callos a la Madrileña, that hearty stew made with tripe, blood sausage, tomatoes and peppers, was only served in common taverns until the long-standing posh restaurant Lhardy added it to its menu.

Lobsters, sold here between 17eu to 36eu a piece, were once fed to livestock and prison inmates – and even that was considered cruel. In David Foster Wallace’s (must-read) essay, “Consider the Lobster,” he writes, “Up until sometime in the 1800s, lobster was literally low-class food, eaten only by the poor and institutionalized. Even in the harsh penal environment of early America, some colonies had laws against feeding lobsters to inmates more than once a week because it was thought to be cruel and unusual, like making people eat rats.”

Then there’s that incredible Brazilian national dish, feijoada, which was originally created by African slaves who made use of undesirable animal parts – the leftovers after reserving the best cuts for their masters – to make a black bean stew. As Jamie Oliver writes: “…the remains of pig ears, tails, tongue, snout, trotters and head were gathered and transformed into a hearty, aromatic stew, packed with seasoning and padded out with beans. It was the perfect meal to sustain the servants who sweated all day in the tropical heat, as well as helping fend off the cold during the winter months.”

Gumbo, the iconic spicy stew of New Orleans, is also believed to have been created by African slaves in Louisiana. (I’ve written about the best gumbo in Madrid – it’s in Trikki Nueva Orleans Cuisine.)

If there’s a running theme among these humble dishes, it’s that necessity can be fodder for culinary creativity!

The next big humble thing?

Now to point my radar to something closer to home, along with a bold prediction by one of my globetrotting culinary heroes, Anthony Bourdain. Recently, Bourdain made a brazen announcement that my all-time favourite Filipino dish, pork sisig, “will win the hearts and minds of the world.”

While I adore Bourdain, I couldn’t help but LOL, imagining this beer garden special as the next plat du jour among the world’s trendy foodistas.

So what exactly is pork sisig? Basically, it’s chopped up pig’s ears, jowls and liver cooked with onions and chilis, garnished with calamansi (Philippine citrus), topped with a fried egg and served on a sizzling plate. This dish is widely believed to have been created out of, again, leftover pig heads sold cheap by the commissaries of the U.S. military base in the region of Pampanga, Philippines, during the American Occupation.

Man, just thinking about sisig is making my mouth water, and also very nostalgic for my university days. Sisig and San Miguel beer practically defined that era for me as I navigated those wonder years filled with new friendships, love and heartbreak – exciting, comforting, sour and bitter, sometimes all at once.  It was what I shared with best friends and beaus, and even strangers in a carpool that liked to stop by a certain roadside carinderia just to get our sisig fix for the day.

So do I think sisig will become the next gentrified food following Bourdain’s prediction? I truly doubt it. It will certainly not be the next vegan wonderfood, obvz.  But with the ever-increasing popularity of street food, and new food and travel documentaries popping up on Netflix every month, stranger things can happen.

On the subject of transforming humble food, I’d like to round up this post with my most recent discovery:  Peko Peko Bao Street Kitchen off Gran Vía (metro Banco España). It’s a casual, kitschy place that offers some Filipino street food on their menu (and plated creatively to boot!) thanks to the two Filipino chefs in their kitchen.

To sum up my recommendations: Nilasing na hipon or in Spanish, Gambon borracho – drunken shrimp cooked in beer, honey and chilis.

This next one is a Pinoy street vendor classic, it’s called “Adidas” – can you guess why? 😀 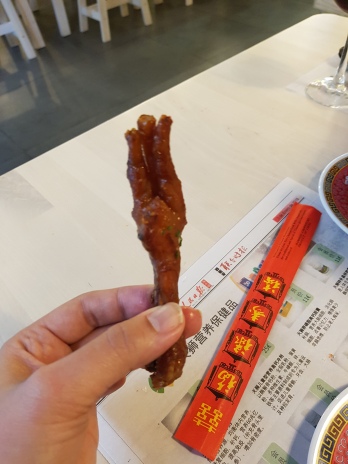 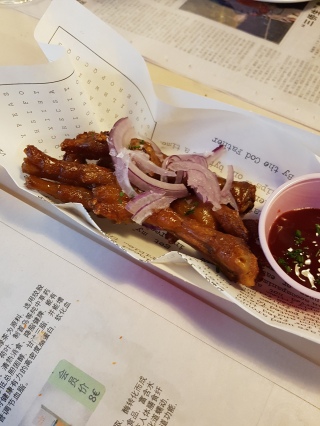 My favorite on the menu (though not necessarily high on the healthy food list) is lechon kawali, or in Spanish, torreznos, which is crispy fried pork belly, eaten with a soy and vinegar sauce, and served with kaki or persimmon salad on the side, as a nice house touch:

More must trys: sticky ribs and “Gyozilla” or fried gyoza garnished with sesame seeds. Most creative dish goes to their Spanish twist to kilawin, the Filipino version of ceviche: Cheek Kilawin or beef cheeks cooked in coconut vinegar and soy sauce. It’s served with homemade mini tortitas which you wrap the beef cheek slices with like a small taco –  creative and absolutely delicious! 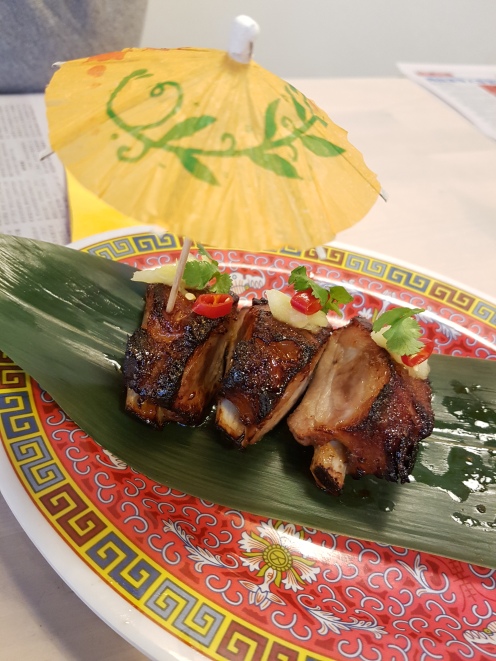 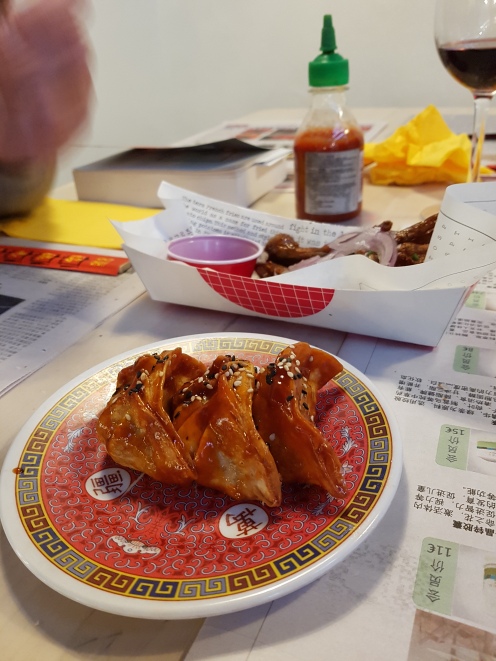 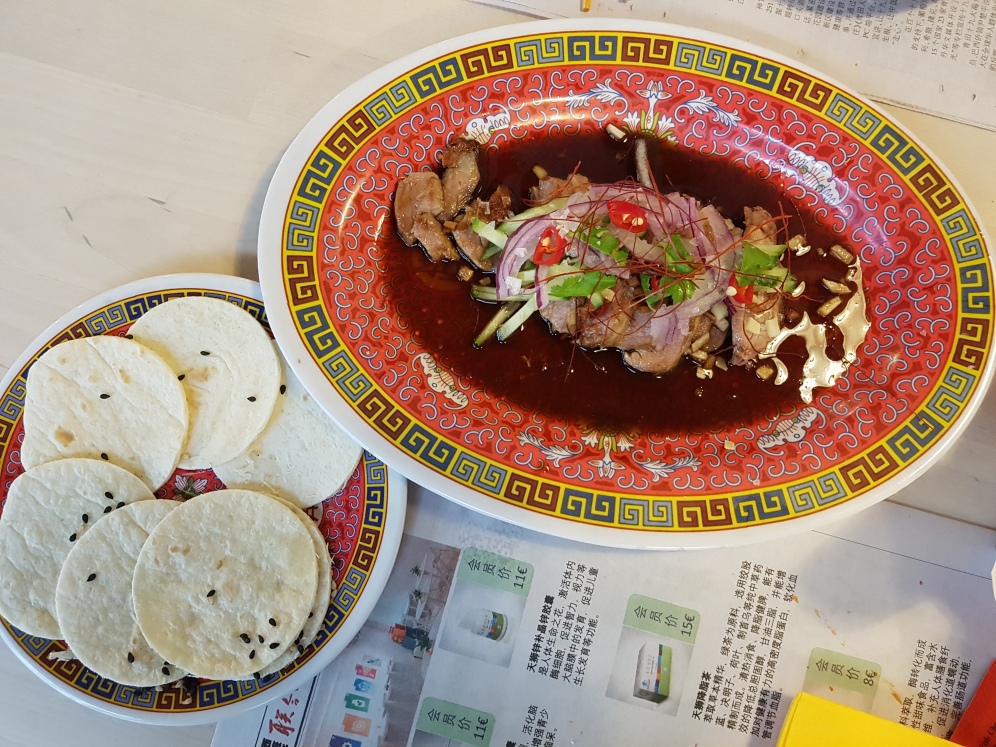 A final anecdote before this gets TL;DR – upon discovering Peko Peko, I excitedly took some of my Pinoy friends there for dinner. After a feast was laid before us, we asked for the one final, critical dish to make it all perfect.

Imagine our crumpled faces when we were told by the lovely Spanish owner, Rocio, that they didn’t have rice that night. Bummer!!!

I guess no matter how much you dress up humble Asian street food, nothing will ever come close to the most revered staple of all – at least in that part of the world where I’m from – rice, rice baby!!

(P.S. Rocio did promise us that there will be rice available at Peko Peko soon, and we’re holding her to that.)