For the past four years now, friends from around the world have been coming over to our flat for Thanksgiving, a.k.a. “Acción de Gracias” in Spanish, or “Friendsgiving” in Millennial.  This year, we had a particularly global bunch fluent in the language of gluttony – for nothing unites a people more than a shared love of carbs. On the table this year was our usual Thanksgiving spread, thanks to my American other half Jef and Daniel Welsch of The Chorizo Chronicles: a 15 lb. roast turkey, mashed potatoes, cranberry sauce, stuffing, sweet potatoes and pumpkin pie with vanilla ice cream.

Post-feast, only two words could perfectly describe my state, which my two cats will now reenact:

And it’s not just our dinner guest list and waistlines that are expanding every Thanksgiving. This year, a growing number of small restaurants (over the usual pricey ones) offered a traditional Thanksgiving spread – a testament to the burgeoning influence of American culture in Madrid’s gastronomic landscape. Add to that Madrid’s fairly recent obsession with brunch and burgers, I’d say American food is finding its day in the sun in my adopted city.

Yet if there’s one branch of American cuisine that I’m a huge fan of, which is still largely unknown among Spaniards, it’s Creole and Cajun food – the iconic cuisine of the sublime city of New Orleans.

Sweet dreams are made of beads. Photo: Jane Mitchell

Ah yes, New Orleans – the cradle of jazz, Mardi Gras and, believe it or not, poker. Back in 2000, I actually went to New Orleans to experience Mardi Gras with some friends. Back then, I was a superfan of Anne Rice’s “Interview with the Vampire” books, and that led me down the “NOLA” rabbit hole, discovering the extraordinary culture of this southern American city.

To be completely honest, I didn’t enjoy the actual Mardi Gras party (too many frat boys asking girls to “show their tits” for beads) as much as I enjoyed the city itself when the parades were over. “The Big Easy” is truly an unforgettable destination  – with jazz music playing at every corner, French and Spanish Creole architecture, and esoteric voodoo culture.

And then I tried the food.

Because of New Orleans’ colonial history, its unique cuisine is influenced by a diverse mix of cultures, including French, Spanish, African, Italian, Caribbean, Acadian, Native American and Portuguese. Creole dishes in particular have a rich variety of tastes and textures, because of the access the African slaves had to exotic ingredients and spices. This synergy has created some of the city’s most amazing dishes known the world over.

So imagine my surprise, and absolute pleasure, when I discovered a new local right down my street in Barrio Chamberí: Trikki New Orleans Cuisine.  I chanced upon them last April, and I’ve been back every week – sometimes thrice in a single week – these guys are the real deal!

My absolute favorite comfort food in their menu is the spicy Gumbo – a traditional mixed stew centered around that most glorious but rather unknown vegetable, OKRA (which is the literal translation of “gumbo” in the Angolan Bantu language). This steaming hot bowl also comes with rice, Creole sausage, shrimp, chicken, celery, green peppers, onions and spices. To satisfy even more Cajun and Creole cravings, I recommend their Jambalaya Rice, made with tomato sauce, Creole sausage, shrimp, celery and spices, and Fried Green Tomatoes cooked with Cajun spices and topped with remoulade sauce: 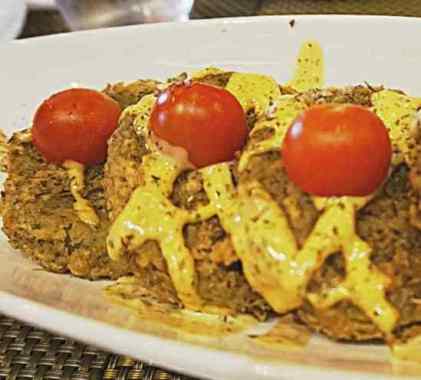 And of course, you can’t think of NOLA without its iconic Po’Boys, which are footlong sandwiches that themselves have an interesting history. Over at Trikki, my favorite one is the Soft Shell Crab Po’Boy:

Of course, after becoming practically part of the furniture at Trikki, I got to know the muy majo duo behind the restaurant: Yuliet McQuitty from New Orleans, and chef Rodolfo Rodriguez from Venezuela. When you meet them, it all makes sense why their restaurant has fast become a barrio hotspot thanks to Madrid’s active word-of-mouth marketing.

Sharing a love of food and literature, both Yuli and Rod learned how to cook at a very young age. Yuliet, a mother of three and the eldest of three daughters, started helping out in the family kitchen since she was ten years old. Rodolfo on the other hand credits his mother as his main influence in the kitchen and dining table.

“My mother understood how it is to cook from the heart, with love and affection,” Rodolfo shares. “She cooked with her senses –  she would feel it. Her food was always full of soul.”

As music is an inseparable part of New Orleans’ culture, Trikki has been conceptualized and artfully designed with jazz in mind. The restaurant’s overhead lamps are stylized by drums and cymbals, saxophones and trumpets hang on the wall alongside black and white photos of jazz icons, and bass drums serve as tables.

One thing I found out from Yuli and Rod is that almost everything was handmade – the bar shelf was taken from the frame of a second-hand sofa, and the wooden tables were designed and handmade by Chef Rodolfo.   Their piece de resistance is the beautiful brick wall that was actually a part of Gran Via in the 1950s! The previous owner had (bafflingly) covered it with cement, and so Yuliet and Rod wore down their hands as they worked on the wall every day for three weeks, painstakingly scraping each brick off the old cement cover.

“You could say this whole restaurant is artisanal because we made everything by hand,” says Rodolfo. “That is why our philosophy at the restaurant is “Todo con Alma”: Everything with soul.

Since opening its doors on Calle Santa Engracia 109, right across the popular nightlife zone Calle Ponzano, Trikki has cultivated a loyal following among customers who keep coming back again and again.

“I think people really enjoy the way that we treat them. They like the food, and they feel comfortable, like they’re home,” shares Yuliet.

“Growing up, you eat at home,” says Rodolfo, “when you’re asked what your favorite dish is, it’s always something from home. So why are we gonna change that?”