Since moving to Madrid in 2008, I’ve come a long way as a host and amateur tour guide – I’ve evolved from describing the city’s ubiquitous equestrian statues as “that’s a dude on a horse” to dishing anecdotes about Galileo’s mathematical contribution to King Felipe IV’s bronze statue in Plaza Oriente.

Over the past decade, I’ve also accumulated great intel about clandestine culinary and cocktail spots in Madrid, some of which I will share here. But just so I won’t give away the farm (it took me 10 years to gather the good stuff after all!), I won’t scribble all their names and locations – but if the curiosity is gnawing at you, feel free to send me an email over the next two weeks and I’ll be happy to reveal them to you.

So here’s a roundup of my favourite hidden sanctuaries in central Madrid:

The centuries-old Monasterio de Corpus Christi holds a fun little secret that’s become a Madrid local legend. This monastery is also home to a clandestine pasteleria (bakeshop) operated by silent nuns barred from contact with the outside world. These nuns are  known as “Las Carboneras” (The Coal Women), because of a painting of the Virgin Mary which their order accidentally discovered in a coal bin (you can also see this painting inside the Monastery’s Church*).

Only a buzzer with a small sign outside hints at the sweets that await inside. Press the button with the faded, typewritten words “Monjas” (nuns) and you’ll be buzzed in.

Pass through the quiet, dark hallways you’ll reach a small, Alice in Wonderland-like  door that opens to a “torno” (turntable). This is where you can place your cash while saying your orders to an unseen nun on the other side of the turntable. You can choose from an assorted menu of lemon cookies, mantecados de yema  (egg yolk cookies), mantecados de Jerez (sherry cookies) and naranjines (orange flavoured sweets) among others. A few seconds later, your cookies and change will appear on the revolving table.

Fun fact: this turntable was actually used hundreds of years ago as a platform for depositing unwanted babies without being seen.

Over the years, the mystery of this local legend has diminished somewhat, because a simple Google search can point you to its location. These days, it’s pretty common to see groups of tourists hanging outside the monastery’s doors.

I’m guessing that the silent nuns are hating on all ’em tourists and such newfangled developments such as the “mobile phone” and “The Internet” for upping their cookie output to meet the demand curve. But they do take work breaks too – this summer, in fact, there was a sign outside the door that said there were no cookies until September!

If you want to impress your visiting friends and family with your insider Madrid intel, take them to this particular hotel somewhere near Gran Via and metro Sevilla that houses two chic, secret spots.

The first is a rooftop terrace bar that offers a gorgeous, panoramic view of the city:

And the second is a speakeasy where Ernest Hemingway apparently used to drink during his time in Madrid. (But then again, where did he not drink?)

To get to this beautiful, secret lounge serving artisanal cocktails, you need to pass through the bathroom stalls of Hotel X. Thankfully, the hotel concierge will be happy to point you to it if you just ask.

3. My favourite paella place that is not exactly paella

Half-hidden in an unremarkable street in Barrio Prosperidad is an insider treasure, my hands-down favourite paella restaurant in Madrid. Owned and managed by three generations of a Valencian family, it’s practically a speakeasy restaurant because it’s easy to miss it if you’re not looking.

A brass knocker outside its wooden door works as a doorbell, and a gateway to gastronomy Narnia:

Knock once and someone will open the door to usher you into an extraordinary place, with suspended laboratory equipment and Polaroid photos, “laundry” artfully hanging above tables, hidden private dining areas, and an autographed photo of the Spanish King, an old customer. 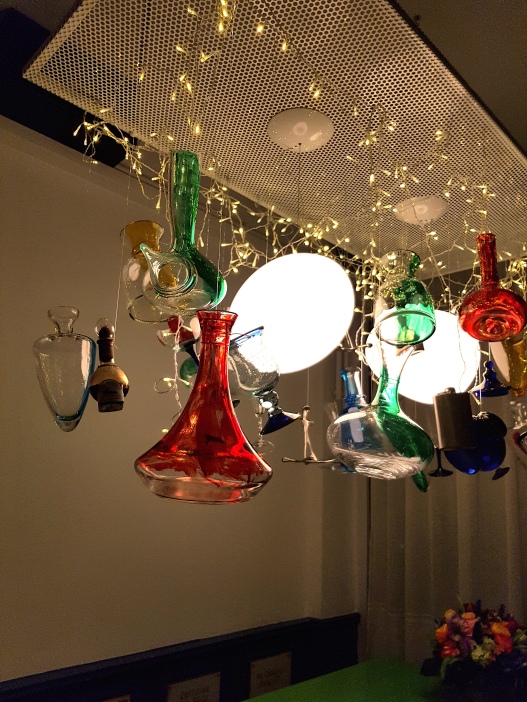 I won’t spoil the fun with too many photos, but let me just share one beautiful piece of art that also hangs on this restaurant’s walls, a souvenir that the Valencian owner acquired in California:

Although this place is known for its paella, what they serve isn’t exactly the traditional Valencian paella but “patella”, named after the brass pan patented by the owner, Norberto. The dish is an innovative twist to the paella that incorporates traditional and modern cooking techniques and different kinds of rice from Asia and India.

Once, Norberto told me that he renamed it to avoid facing the ire of the Spanish purist mob (Just ask Jamie Oliver after he innocently added chorizo to a paella recipe!).

The food here is beyond excellent, apart from the patella dishes, they are also known for their exquisite smoked salmon, homemade balsamic vinegar, and fine selection of wines. Oh, and this baby:

One other thing – the friendly Filipino waitstaff who have been working there for over 15 years is possibly the most professional crew you’ll ever encounter in Madrid.

4. How does your garden grow?

The warmer months in Madrid mean terraza season. One of my favourite ones is a secret rooftop garden that crowns a 4-storey leather accessory store somewhere between Sol and Gran Via:

This lush setting is a great gathering place for sunset G n Ts.

5. Midnight in the Garden of Food and Olive Trees

In the middle of Madrid’s bustling business district lies a lush oasis of hundred year old olive trees where you can dine and listen to live classical music. Finding the restaurant at night may not the easiest thing because there’s a dark, Blair Witch Project-like stretch that looks like it leads nowhere. But the path soon opens up to a magical, romantic scene that’s straight out of the movies. The menu selection of Spanish tapas is admittedly limited, but it’s forgivable in such a divine destination.

All right, you’ve come this far into the post – that deserves a reward! 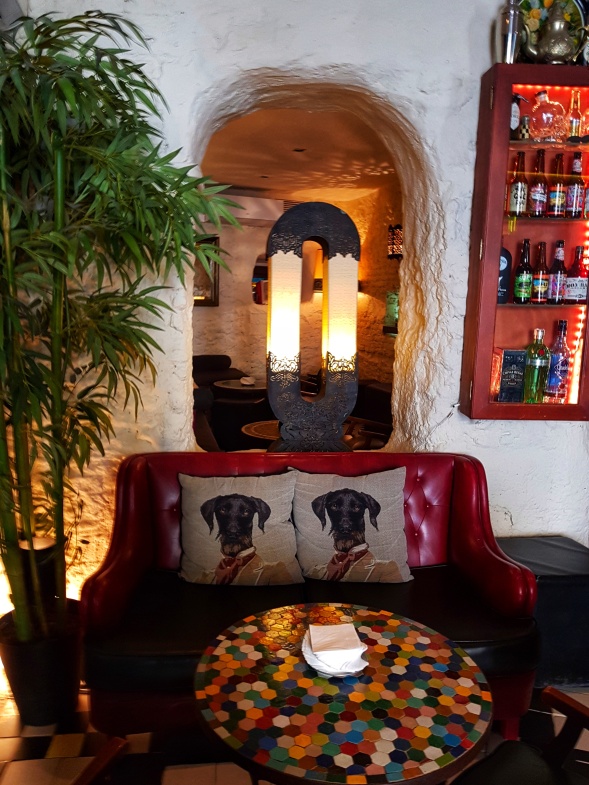 And Amicis, which has a beautiful private event cave/space below its main restaurant floor:

Indeed, it is no secret that Madrid is filled with hidden treasures awaiting to be discovered – right around statues of dudes on horses.

Happy end of summer everyone!

Who loves you? As I mentioned earlier, feel free to email me (kusinamadrid@gmail.com) within the next two weeks and I’ll divulge the secret locations of #2, #3, #4 and #5 – but it would be really cool if you also gave me an insider tip too!

*One more thing – the book Hidden Madrid , written by my friend Mark Besas, is an excellent read about Madrid’s historical places and oddities. This is also my reference for background info on the Las Carboneras silent nuns. Cheers!