“You know what umami means in Japanese actually? The literal translation of umami? Umami literally means, ‘I will f*** you for a bite of that burger.'” – Anthony Bourdain, Parts Unknown

That elusive “fifth flavour” is about as easy to describe as a new colour appearing on the spectrum. Though the word has been appearing more often nowadays in American or British cooking shows and articles, the concept is still largely unfamiliar and exotic here in Madrid.

Fortunately, I had the chance to find out more about this mysterious fifth taste at a recent workshop given by Michelin-starred Japanese-French chef, Gohei Kishi, who headed all the Asian concepts for the Gordon Ramsay group of restaurants in London. Inside the castiza cave of (one of my favourite Madrid restaurants) L’Artisan Furansu Kitchen, Chef Gohei helped us understand umami better by taking us through its history, and by giving us a simple tasting exercise to distinguish the umami flavour.

So what exactly is umami? 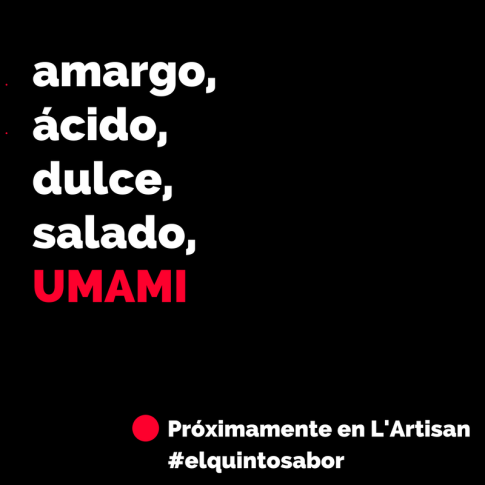 Umami is also known as the savoury taste, after sweet, sour, bitter and salty. To unlock this flavour, Chef Gohei passed around cherry tomatoes and asked us to pick one and chew it about thirty times without swallowing it. This is not as easy as it sounds, so I actually had to do it again (and I admit, even tried a few more times at home!). Once you’ve chewed the cherry tomato down to a pulp, the interplay of flavours all over your tongue offers a pleasant taste. Such is Umami 101.

This savoury taste, which induces salivation, comes from the presence of glutamate. Apart from tomatoes, glutamate is also found in mushrooms, cheese, fish sauce, seaweed and soy sauce.  This is why the simple combination of tomatoes and cheese in a pizza or pasta is really tasty, according to Chef Gohei, because it merges two umami-rich foods.

This is also why flavour enhancers containing monosodium glutamate (MSG) such as the most awesome Knorr seasoning or the Pinoy kitchen staple, Ajinomoto, seem to miraculously amplify the flavour of, well, pretty much anything if my memory serves me right.

We now interrupt this Umami article to indulge in a memory sponsored by Knorr seasoning.

I was 17 years old when I backpacked around Western Europe for the first time after graduating college.  We were a big group of nine friends from university. One of my friends, Pepper, carried a bottle of Knorr seasoning wherever she went. Seriously, she placed Knorr on everything – on steak frites in France, on arroz in Spain, heck she probably secretly put Knorr on her Italian pizza when we weren’t looking.

Today, almost exactly twenty years later, Pepper is now a successful and well-respected artist living in Brooklyn and has also grown to be quite the knowledgable gourmand. Yet little do her fans know that she was once our spritely little backpacking buddy who added droplets of liquid MSG on her cassoulet at a restaurant in Carcassone.

Yet I couldn’t blame her. Actually none of us could take this against her, because let’s face it – KNORR FREAKING ROCKS.

Back to regular Umami programming.

Chef Gohei then passed around small shot glasses with different flavoured broths – bonito fish broth, dashi stock, kombu (edible seaweed) and shiitake mushroom stock. After getting a taste of each, he asked us to combine these broths using equal parts, and asked us to taste the new concoction. The flavour was incredible, and it made perfect sense now why  something as deceptively simple as miso soup was so damn good – it was actually a complex interplay of different flavours to create full natural umami-ness.

That umami is a Japanese “invention” or concept is a common misperception. Based on my intensive research conducted in the Google School of Higher Learning, the core umami element of glutamate has a place in a long history of cooking. Fermented fish sauces were used in ancient Rome, and soy sauce goes back centuries in China. Fermented barley sauce has also long been used in Arab cuisine. Even French chef and culinary royalty Auguste Escoffier was known to combine glutamate with the four known tastes in his Paris restaurants in the 1800s. Yet Escoffier did not have a word for this flavour.

It was in 1908 when the Japanese professor Kikunae Ikeda discovered that glutamate was the source of the flavour of kombu seaweed and thereafter named it umami.  A few years later, Professor Ikeda’s disciple, Professor Shintaro Kodama discovered that bonito flakes also contained umami, and then four decades later, another Japanese Akira Kuninaka identified umami in shiitake mushrooms.

The Japanese have passionately worked over the years to understand and distill this sublime flavour and today, strive to feature this component in every dish.

“The Japanese have a long tradition of working on something every day to perfect it,” shared Chef Gohei, referring to the spirit of the “Shokunin” or “artisan” who spends a lifetime mastering his craft.

So while we in the Philippines happily embraced Ajinomoto and Knorr seasoning as a core component of our diet –  unaware that we had already become disciples of umami in the process – north American households did the opposite in the late 1960s and in fact pretty much demonized MSG because of what was called “Chinese Restaurant Syndrome (CRS)”.

CRS was first “discovered” in April 1968 by an American doctor and Chinese immigrant Dr. Robert Ho Man Kwok. In a letter to the New England Journal of Medicine, he described symptoms of dizziness and numbness after eating at Chinese restaurants, and singled out MSG as the culprit. Then in 1969, Dr John Olney at Washington University  injected and force-fed newborn mice with huge doses of up to four grams/kg bodyweight of MSG  and reported that they suffered brain lesions. He went on to conclude that the MSG found in one bowl of soup would similarly damage the brain of a two-year-old. Cue in: mass MSG panic in America over the next three decades, because America.

Thankfully, Chinese Restaurant Syndrome has long been debunked as a myth thanks to more than a decade of scientific research.

And even more thankfully, the widespread fear of MSG hardly made a dent in the Philippines while I was growing up and gobbling up loads of the stuff.

We came to the best part of the workshop yet – the Four Seasons of umami plate (pictured below) that showcased umami flavours in distinct plates from four countries:  Chawanmushi (Japan), Panceta guisada (China),  Salmorejo con jamón serrano (Spain) and Solomillo “Café de Paris” (France). This beautiful L’assiette UMAMI by Chef Gohei is incidentally being served exclusively in L’Artisan for the month of August.

The verdict was unanimous – or should I say “umami-mous”? Delicious, deceptively simple but actually complex. And even if I suspect that some of my workshop classmates hadn’t been able to distinguish umami just yet, it’s all good – Chef Gohei said that it actually takes some practice to train your palate. I foresee many a cherry tomato chewing in the near future.

I truly hope that this little exercise helped spread the Gospel of Umami in the Spanish culinary landscape. Because you simply can’t get enough umami in your life.