T minus 3 days and counting to the Chefugee Syria dinner, I found myself whisked on a magic carpet ride to a wonderful and exotic land I had never been to before… the Carniceria de Amana Food halal supermarket near metro El Carmen.

And who better to give us a tour of this Syrian grocery than a Syrian refugee? Ali, a refugee from the west-central city of Hama was my unflappable tour guide for the day. Ali’s wife Wesal was the appointed kitchen commander for the upcoming Chefugee feast for forty guests this Saturday, but as she was at home taking care of their one month old baby, he volunteered to do the grocery shopping.

Along with two other friends and Chefugee volunteers Malak, our indefatigable Lebanese translator, and Kristen, our Swedish driver, we spiced up our lives with an hour long immersion in Amana Food.

As soon as Ali opened the glass doors to usher me inside, I realized I might as well have been an alien visiting from another planet, seeing the ingredients so far off from my usual culinary orbit: green-coloured frike rice, bottles of aromatic rose water, pickled turnips in neon purple, rows upon rows of tahini, or ground sesame seeds, enough to make hummus for the next ten years, spherical labneh balls floating in orange liquid, stuffed grape leaves, and spices in the form of tiny crystals and powders that would have left any spice-hunting Conquistador light-headed.

Water of every flavour

Green cardamoms, Malak said in Lebanon, they typically flavour their rice with this 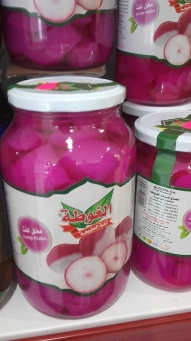 Say that you labneh!

As Ali waltzed along the aisles picking up the extra-terrestrial food stuff, he pointed at a row of glass bottles containing colorful juices.

“Choose,” he said to us in Arabic. “I invite you.” So I selected this kryptonite-coloured kiwi concoction with floating black seeds and took a cautious swig.

“Wow!” I said of the delicious pulpy juice. That brought a bright, toothy smile to Ali’s face.

“If you ever visited Syria,” he said, “you would never want to go back to Europe.”

(PART TWO – continued in my article published in Esquire magazine!)