The sound of the word just reaches my ears the wrong way, kinda like “Influencer”, “woot” and (for a major throwback) “Friendster”.

That’s why I literally LMFAO when I read  the Urban Dictionary definition of “foodie” :

1) a person who has no actual interests or hobbies

2) a douchebag who likes food

3) A person who enjoys eating food, unlike everyone else, who hates food, thinks it’s disgusting, and would never consider eating it.
example:
Person #1: I’m a foodie, I love eating food!
Person #2: Wow, you’re so unique. I hate food and wouldn’t eat it even if I had to stay alive.

Then again, I’m guessing that when the word “epicure” first graced the common tongue in the 14th century to describe a person who cultivates a discriminating palate (from the Latin Epicūrēus) or “gourmand” in the 15th century (from the Old French gormant or “glutton”), I bet some snarky scribblers thought it was the most obnoxious and elitist thing they’d ever heard in their lives as well.

Yet I have slowly, begrudgingly accepted this word as part of the everyday vernacular. As a bulk of my work involves dealing with chefs, home cooks, food writers and bloggers who repeatedly say this word day in and day out, I guess I’ve become desensitized to the aural assault. If you can’t beat ’em, join ’em right? (Still, I bristle when people describe me as the F word.)

When some people, good friends included, describe themselves to me as a foodie, I just cannot help but compare them to the one person in my life who would, well, out-foodie them all without being obnoxious about it – my mother.

Indeed, if we are to go by the intended meaning of foodie – as someone who enjoys food/ someone with a discriminating palate – I would say that my mother was the O.G. F. W. – Original Gangsta’ F-Word.

To begin with, she knew what NOT to make my brother and I eat when we were growing up. Coke was absolutely banned from our diet. Occasionally, she allowed us to drink Sprite and Royal Tru Orange (the Pinoy version of Fanta) but even these were frowned upon for being too sugary. She allowed us to eat chocolate once in a while, but snacking on junk food was akin to blasphemy. Being a strict Catholic mother, she was pretty good at making me feel guilty too. I once snuck home potato chips from school and couldn’t even eat it when I was alone, thinking I needed to confess to a priest for smuggling the contraband.

What she did make sure we ate regularly was what I considered before as weird food.

The dishes that graced our dinner tables were a testament to her love of travel. I was probably three years old when she first let me try wasabi with tuna sashimi. On weeknights, when we didn’t have Filipino food staples like adobo and kare-kare, and with no special occasion, we regularly ate:  moussaka (Greek eggplant dish), paella, puttanesca (literally translated from Italian to “in the style of prostitutes”) that were made with homemade pasta noodles, shark’s fin soup, oysters, Szechuan style crabs, century egg, Swiss fondue and raclette cheese. Raclette cheese on a humid night in Manila!

One night, we actually had frog legs for dinner – and I can bet we were the only freaking non-French family in the Philippines eating les cuisses de grenouille that night. 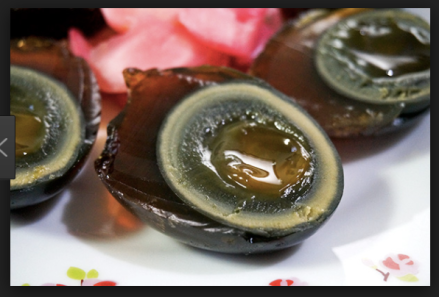 Every November, though we weren’t Americans, we nevertheless had Thanksgiving dinner at home. When I told my mom that my high school crush made fun of me for celebrating Thanksgiving, my mother justified it as our way of “giving thanks to God,” but honestly, I think she just wanted to eat turkey, stuffing and cran. Sigh.

Oh and eating out was a nightmare for me as a kid who just liked my simple Pancake House spaghetti. As my mother was always craving for Thai and Vietnamese food, she always dragged the family to restaurants with menus I couldn’t read. So instead of getting my spaghetti, I had pad thai.

Even when we visited the States every summer in the 80s (half my family lived in San Francisco) I would groan loudly each time my mom dragged us to eat Dungeness crabs in this restaurant founded by Vietnamese immigrants, Thanh Long. For me, that just meant struggling with the crab pincers all night.

By now, if you’re wondering whether my mother was a party-hopping socialite who tried to impress people with her culinary adventures, you couldn’t be more wrong – she was, and still is, the most painfully shy person I know. It’s just that when it came to food, she simply loved to eat and eat well.

And yet I complained like a whiny, ungrateful teenager that my mother was making our lives miserable with all this bizarre food.

So what changed me?

As my brother and I grew older, thanks to the all-out ban on Coke, potato chips and junk food, we never became overweight and were actually pretty fit (also thanks to all the sports we played).  To this day (knock on wood), I have never been hospitalized or diagnosed with a serious illness, and I truly believe curbing my sugar intake at an early age was a big factor.

Sometime in my mid-twenties, I finally realized that my mom’s global food obsessions had left an indelible imprint on my palate.

I think it officially hit me the first time I moved away from home to study in Sydney and needed to cook for myself.

I found myself craving for her damn puttanesca, pad thai and spicy prawns so I ended up asking for her recipes or scouting for authentic Asian restaurants in the city. And when I was around an international group of friends for the first time, I was surprised at my own knowledge of “exotic” food when we all ate out. I remember being mildly pleased when my Norwegian buddy told everyone in the group that if they wanted restaurant recommendations, to “ask Natalia, she knows how to eat.” Funny right?

And the biggest gift of all albeit it came really late in my life – my love for cooking. Creating my own dishes by knowing what flavours work together is something that doesn’t happen overnight, I’d say it takes years of tasting, experimenting and eating all sorts of food in the flavour spectrum.

So I guess this is my ode to my mother, the OGFW – more than three decades later, I am absolutely grateful to her for her sugar-denying, Dungeness crab eating, Thanksgiving stuffing ways. Because of her, I  can look at any self-proclaimed foodie in the eye and say: “you know nothing, Jon Snow.”